This article describes how car differential works. A differential is an integral part of all four wheeler’s. Wheels receive power from the engine via a drive shaft. The primary function of the differential is to allow these wheels to turn at different RPM while receiving power from the engine. Consider these wheels which are negotiating a turn. It is clear that the left wheel has to travel more distance compared to the right wheel. Means the left wheel has to rotate at a higher speed. If these wheels were connected using a solid shaft as shown in the video animation, the wheels would have to slip to accomplish the turn. This is precisely where a differential comes.

The ingenious mechanism in a differential allows left and right wheels to turn at different rpm while transferring power to both the wheels.In this article we will learn how differential achieves this in a step by step manner, using its most straightforward configuration. Power from the engine transferred to the ring gear through a pinion gear. The ring gear connected to a spider gear, which is at the heart of the differential. Spider gear is free to make two kinds of rotations, one along with the ring gear and second on its axis. Spider gear meshes with two side gears. So, power from the engine flows from the pinion to the left and right wheels as shown. Now let’s consider different cases. The vehicle moves straight. In this case, spider gear rotates along with the ring gear but does not rotate on its axis. 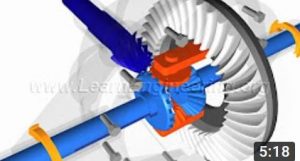 Spider gear push and make the side gears turn, and both will turn at the same speed. Alternatively, when the vehicle is moving straight, Spider- Side gear assembly will move as a single solid unit. Now consider the case when the vehicle is taking a right turn. The spider gear plays a pivotal role here. Along with the rotation of the ring gear, it rotates on its axis. So the spider gear has a combined rotation. The effect of combined rotation, on the side gear, is impressive. When adequately meshed side gear has to have the same peripheral velocity as that of the spider gear. When the spider gear is spinning as well as rotating, the peripheral velocity at the left side of spider gear is the sum of spinning and rotational velocity.

However, on the right side, it is a difference between the two. Alternatively, left side gear will have higher speed compared to the right side gear.This is the way the differential manages to turn left and right wheels at different speeds. While taking a left turn, the spider gear spins in the opposite direction. To carry the load, one more spider gear usually added. Four spider gear arrangement also used for heavy load vehicles.

Apart from allowing wheels to rotate at different rpm, the differential has got two more functions. First is speed reduction at pinion ring gear assembly. The result in torque multiplication. The other function is to turn the power flow direction by 90 degrees. This differential is known as an open or standard differential.

It is capable of turning wheels at different rpm, but it has got one major drawback. Consider a situation where one wheel of the vehicle is on a surface with excellent traction and other wheels on a slippery track. In this case, a standard differential sends the majority of the power to the slippery wheel, so the vehicle won’t be able to move. To overcome the problem Limited Slip Differentials was introduced. We will learn more about them in another article.
Hope you like this article on how car differential works. Please feel free to comment your doubt, and we will respond to you.

Found Sunken Truck Underwater in the River at Boat Ramp!

Torque Converter | Everything you need to know about its working.

Centrifugal supercharger | Everything you need to know about its working.