How hydraulic brake works and brake bleeding is done. 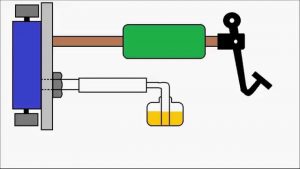 Let’s see the apparatus required for brake breeding. It is done through the bleeding valve. There is a bleeding nipple on the bleeding valve. A bleeding pipe is connected to the nipple and dip it in a jar with the brake fluid as shown. So this is the apparatus required for the bleeding.
Now let us see the brake bleeding procedure.
Initially at the top of the master cylinder with brake fluid. So that sufficient amount of brake fluid should be available inside the brake master cylinder. A brake is applied by keeping the bleed valve closed. So this is the bleeding valve is in a closed condition. Usually, it will be in the closed state. So keep it in the closed condition. Two people are required for the brake bleeding process. One person inside the driver’s cabin, to apply the brake pedal. The other person, down the vehicle to open up and close this bleed valve.
So as the person inside the cabin is pressing the brake pedal. As shown in the video, you can see the brake pedal getting trust and the pressure inside the master cylinder increases. The pressured oil moves into the wheel cylinder. As you can see, so the pressure increases in the wheel cylinder. So right now, what we do is that now open up the bleeding valve. So as the person down the vehicle opens up the bleeding valve. You can see it’s getting opened and air escapes out with a little amount of brake oil. So air is escaping out from there right you can see where it’s happening and the brake oil flows. Now close the bleed valve and release the brake pedal.
So first you have to close the brake valve. As the brake valve is shut. The person inside the cabin should release the brake. The brake pedal should only be released by keeping the blade valve closed or else it will suck the air from the atmosphere to the wheel cylinder.
So the procedure is very simple first press the brake pedal slowly open up the blade valve so that the air can escape. Then close the blade valve and then rerelease the brake pedal. So that’s merely the procedure for brake bleeding. This process of bleeding is continued until no more air bubbles available.
Why the brake bleeding has to be done.
If you see your hydraulic brake is not efficient enough, you need to look at that air is entered into the system or not. So the air needs to be bled out. The hydraulic brake system consists of hydraulic oil, and this hydraulic brake oil is incompressible according to Pascal’s law. When a pressure is applied on a confined liquid, the pressure is distributed in every area in the right angle with equally.
As the brake unit is a closed unit with hydraulic oil. This Pascal’s law is getting applicable, but gradually air enters into the system. As air is compressible, what happens is that, as we press the brake pedal the air gets compressed. Which is inside the system and efficiency of the brake loses out. So to avoid this brake, bleeding has to be occasionally done by opening up the blade valve and doing the procedure that we have explained.
So I believe this was useful to you, please click the subscribe button for more tutorial video updates. Please feel free to drop comments if you have any doubts.

How do Submersible pumps work ?

How hydraulic ram or cylinder works explained in detail.

How hydraulic brake works and brake bleeding is done.