In this article, we have covered the basics of the anti-lock braking system. It is the most efficient braking system which is now commonly used.

Nowadays an anti-lock braking system is used in almost all modern vehicles. This system prevents accidents like as shown in the video. This where you lose control of the steering, as you apply the brakes. With ABS you will be able to steer the vehicle properly. It also reduces the braking distance.
What is the anti-lock braking system? How is it able to prevent accidents due to the braking. We will explore these questions in this video. To correctly understand the anti-lock braking system, we first need to understand the principles of steering and braking.
When you press the brake pedal, the brake pads on the wheel disks will be activated and press against the disks. This will stop the rotation of the wheels. As the wheels stop, this causes slippage between the road and wheels. The vehicle stops due to this friction.
Now let’s understand the steering mechanism. The whole steering mechanism is dependent on the simple principle of the wheels rolling. The wheels will always try to avoid slipping on the road. So this means that. The velocity of the wheel at the contact point will always be zero. The wheels have two kinds of motion they rotate on their axis, and also they move along the direction of the car. Due to these two kinds of motion, they have two kinds of velocity. Translational and rotational, for non-slip rolling conditions, the sum of the translational and rotational velocities at the contact point should be zero. Just keep this simple principle in mind, and you will very quickly be able to understand the steering mechanism. In an automobile, all four wheels should be rolling at all times to avoid the vehicle slipping. In fact, this simple rolling principle is the reason why your car turns when you turn the front wheels. Let’s examine this assumption, a hypothetical condition in which even after turning the wheels the car carries straight on. In this case, the rolling velocity will be inclined as shown and the translation velocity remains straight. Therefore if you add up these two velocities, the resultant velocity will not be zero. This will cause the car to slip. The only way to avoid this is by making the translation velocity also inclined. This is possible only when the whole car makes a turn. 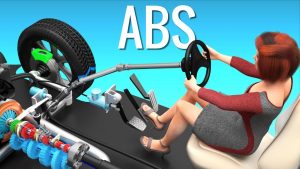 As shown here in the video, when the car makes a turn at the instantaneous center. Shown all four wheels can satisfy the condition of rolling from this snapshot. You can see how the velocity at the contact point of all four wheels becomes zero. Now let’s analyze the steering mechanism at the time of braking. Due to the brake pads being activated. The wheel stops spinning even though the wheels are turned. Since they are not rotating. There will be no rotational velocity at all. In this case, the vehicle does not need to turn. As this has become a typical case of braking. The vehicle will no longer react to the driver’s changes to the steering and will slide in a straight line. Which can cause an accident apart from losing control of the steering. Cars without anti-lock braking system or otherwise called as ABS face another big issue. Braking on surfaces with different levels of traction when the left and right wheels are on different traction surfaces. Applying the brakes will generate different frictional forces on the wheels. This will produce torque, and the car will go into an uncontrollable spin. Let’s see how anti-lock braking system or ABS solves these issues.

An anti-lock braking system is straightforward. What anti-lock braking system does is to prevent the wheels from completely locking up. The ABS includes speed sensors. Attached to all of the wheels, when the sensors detect that a wheel is about to lock up. A modulator unit partially releases the brake pad on that wheel. This way the wheels will be allowed to spin intermittently. During braking, you can immediately see the effect of this intermittent wheel rotation. On steering here, the wheels will have a rotational velocity component. This will undoubtedly allow the steering to function and driver will be able to steer the vehicle even during the braking.

But the big question here is, how does the action of intermittently releasing the brakes reduce the braking distance. To get an answer to this question, we first need to understand how the coefficient of friction between the tire and the road varies concerning slip. In perfect rolling conditions, the value of the frictional coefficient is nearly zero. However, when the wheel is 100% slipping, sliding friction comes into play. You can expect the frictional values for other levels of slippage to vary like this. But since rubber is a compound material, which has strange behaviors during braking. The frictional coefficient between the tire and the road varies as shown concerning slippage.

Now back to the vast instability issue of the cars by intelligent electronic braking distribution. Which is a subsystem of the modern anti-lock braking system or ABS. With this one can overcome this issue very quickly. An EBD yaw rate of the car and the relative slip of each wheel is measured. Just by reducing the brake pressure on the wheels with higher grip. We will be able to reduce the frictional force produced by these wheels. This will keep the yaw torque and the whole car under control.

We hope this video gave you a clear conceptual overview of the workings of an anti-lock braking system or otherwise called as ABS. Please feel free to drop a comment in the section below if you have any doubts.

One pedal driving explained in detail with video.